In its second edition, the museu do louvre pau-brazyl presented Lais Myrrha’s solo show Desdito [Disavowed] (2017), which unfolded as a performance and an exhibition in collaboration with Vão, Pio Figueiroa, and invited brass bands.

The focus now is on the Louvre’s absent painter, the only artist whose name is given to one of the condominium’s five blocks, but without any physical evidence of this. Unlike his iconic peers from European art history, for whom the building’s front blocks are named, neither Pedro Américo’s name nor reproductions of his works appear within the entrance halls.

From this structural division—of the noble, Frenchified front and the generalized background in the figure of a Brazilian painter—Lais Myrrha subverts the painting Independência ou Morte! [Independence or Death!] (1888) by Pedro Américo—an image frequently fashioned as the birth certificate of Brazil’s Independence—transforming the canvas into flesh and blood by dressing musicians from the brass band in the painting’s color palette, and dividing them between the figures of Dom Pedro I, his entourage, and the cavalry.

This new, embodied composition of the painting journeyed through the Pedro Américo spaces in the Louvre building as they played the Brazilian Anthem of Independence, which over the course of the procession was transmuted into the “Still-Pending” Anthem (“Ainda Pendência”), with composition and arrangement by musician Henrique Mendonça—a rebellion against the original composition made by Emperor Pedro I himself.

Desdito - Lais Myrrha (2017) from museu do louvre pau-brazyl on Vimeo.

The performance begins and ends on the staircases, where the performers emulate the painting, forming a tableau vivant. The topography of ascension recalls the historical Ipiranga Hill, with the notary public’s office at the bottom standing in as an hereditary captaincy. Photographer Pio Figueiroa captured these two moments.

After the performance, the two photos produced during it were exhibited in the building, functioning as more than a mere record of the event. Through them, the history of the building, which until then only showcased European art history, is distorted. Moreover, these new images condense a series of elements and temporalities: the history of the prince regent’s return voyage from the coast atop a mule when he broke free from Portugal, Américo’s mythologizing of the moment, Artacho Jurado’s designs—the curved staircase, the faded gold ornaments, the green plastic carpet—the notary beneath the stairs, the performers and the audience in Brazil in November, 2017. The photos are a summary of the entire conjuncture, whose only possible future is its mirroring.

between the said and the unsaid

the coup of images 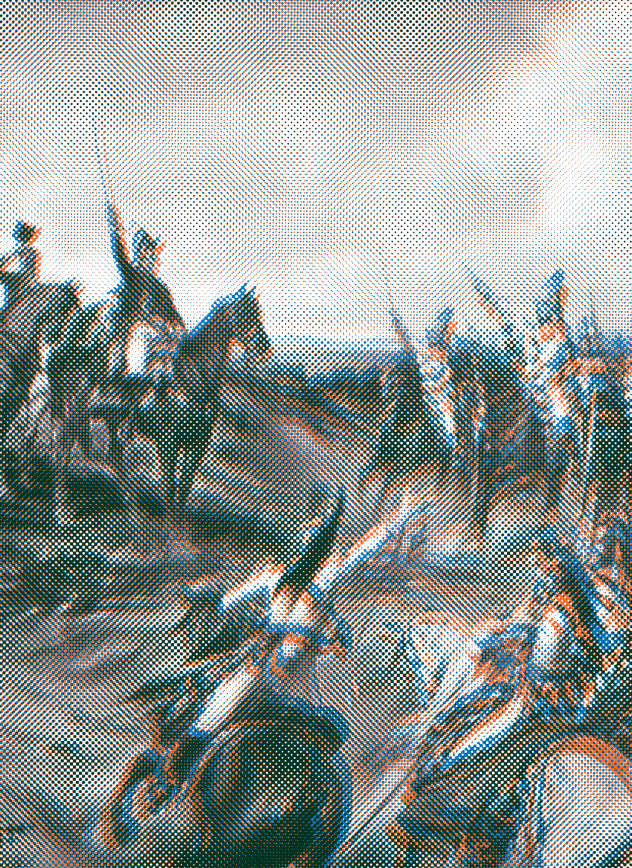 where is pedro américo?

archive from the museu paulista